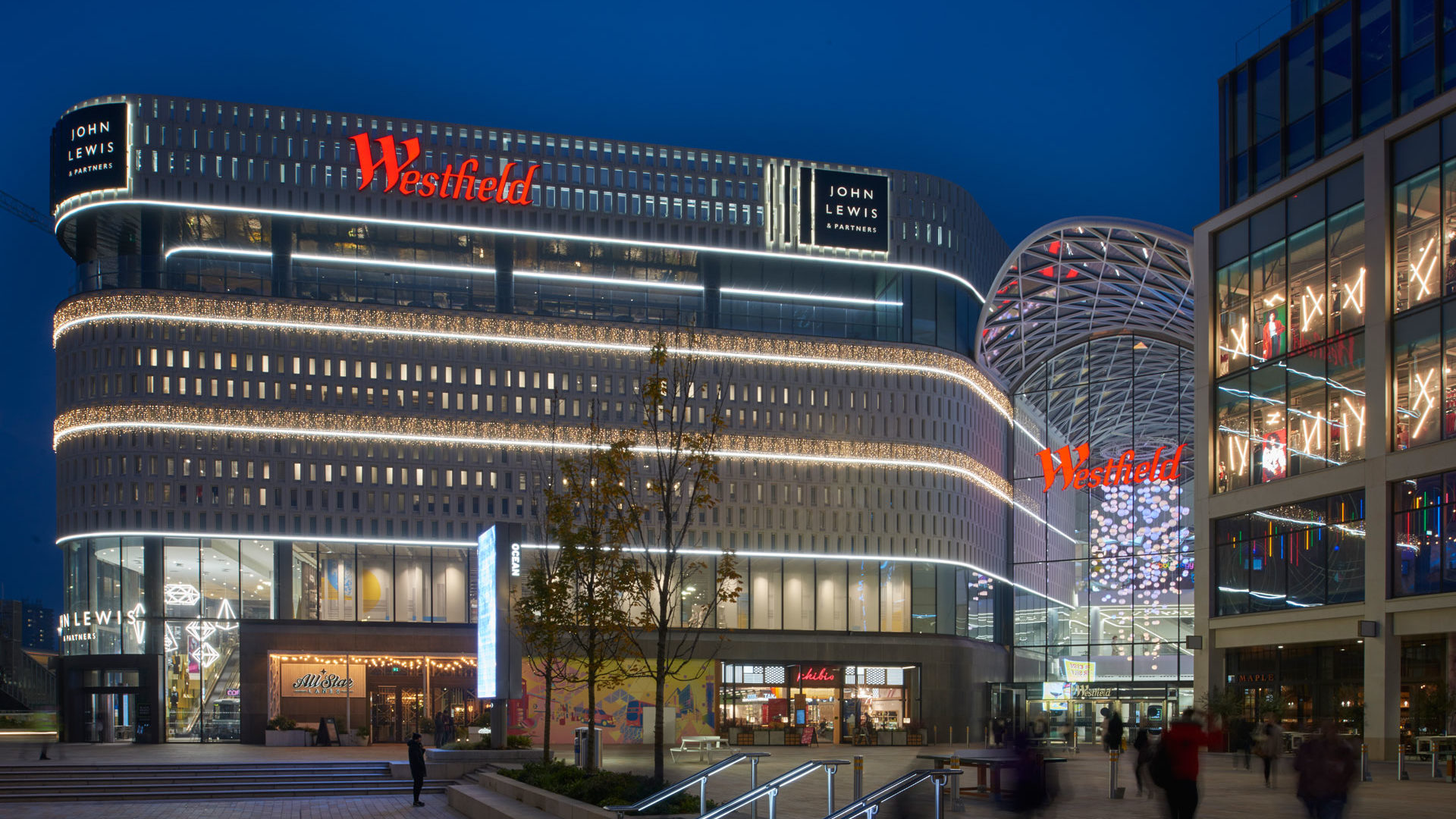 Case Study: Harnessing the power of light at Westfield London

2018 was a landmark year for Westfield London. After embarking on a £600 million retail expansion that launched in March 2018, the center became Europe’s largest shopping center and claimed its place as one of London’s premier retail and entertainment destinations.

The center, which is popular with visitors from across the UK as well as international visitors, and which in recent years has attracted a reported footfall of more than 27 million visitors annually and retail sales in excess of £1 billion in 2018, also had a 10th anniversary to celebrate in October.

Celebrations started as early as March with a carefully designed campaign that involved events and entertainment throughout the year, but the center was also well aware of the importance of the holiday season and the so-called “economics of Christmas”.  They made a decision to revamp their festive lighting and decoration, indoor and outdoor, with a switch–on date planned shortly after their star-studded anniversary celebrations on October 30th.

The right look and feel

The center wanted a festive look and feel that was unique, contemporary, and that would appeal to their diverse local and international audience. They wanted to build on their reputation for innovation and trend-setting by offering visitors a festive atmosphere that would dazzle and delight, drive footfall and encourage flow, and that would enhance visitors’ shopping experiences, too. One consideration, however, was the size of Westfield London. It boasts an area of 240,000 m² (2.6m ft²) and a retail floor area of 150,000 m² (1.615 million ft²), so any festive lighting and décor needed to create a consistent and cohesive atmosphere in a space the size of roughly 30 football pitches.

The winning concept by Millington Associates ticked all the boxes. Ultra-modern and animated to draw the eye and create a “wow” effect, it featured a series of festive highlights that were to be strategically placed throughout the center to encourage movement and flow. Multiple chandeliers comprising strings of animated balls of light created islands of festive cheer throughout the center without the need to decorate every inch of the retail floor, and structural elements like internal supports were to be transformed into a forest of light-filled trees thanks to the application of strings of lights. The center’s façade would be simply but tastefully decorated with cascades of draping lights to draw the eye and act as a beacon in longer nights of winter.

From idea to reality

With the concept approved, the next step was to turn the idea into a reality and that’s where MK Illumination was able to help. As an international player in the festive lighting industry and the world market leader in festive decorative lighting, the company was able to work with their teams of designers, technicians, engineers, and their European-based production facilities to produce and programme the animated chandeliers and the structural and façade lighting that was needed to give Westfield London its holiday atmosphere. With the indoor concept only being finalized in mid-July and the switch-on being 31st October, a global team came together to pool their resources to make sure that the products were not only produced to the highest quality but delivered in good time for onsite installation.

“We needed to be as efficient as possible, so we spent a lot of time planning how we could pre-program lighting effects into the chandeliers and then pack them in a such a way that they wouldn’t break in transit and so that they would be ready to plug and play on arrival. This sounds like a given but needed a lot of thought. Fortunately, we’ve been doing this sort of thing for 22 years, but it was still impressive to see the planning, production, and packaging team at work,” said John P. Henninger, Key Account Manager at MK Illumination.

The installation role was split between two companies, with MK Illumination being responsible for the external and façade lighting, and Westfield London’s contractor taking responsibility for the internal installation under MK Illumination’s supervision. Given the size of the center, the complexity of installing multiple islands of lights, the constant testing of animation, and the relatively short time to install the festive lighting and décor, a total of 5 weeks was needed to complete the installation with teams of up to 20 people from multiple countries working through the night to bring the lighting concepts to life.

“There was never any doubt that we’d deliver as promised, but we the installation certainly had some tricky moments! Westfield is a city within a city and it presented some unique challenges. Sometimes the challenge was simply where to find power without getting lost in the maze of corridors,” Henninger laughed. “We had to work out how to wire and network a vast space without showing cables, power supplies and splitters; create custom matrix tools to help us manage the animated balls; and devise a system to keep track of thousands of pieces of cable, cartons and pallets to help us dismantle the lighting at the end of the season. It was incredible to experience.”

On October 31st, the lights went on and inside Westfield London, 2000 light-filled, animated balls rippled with color. Outdoors, almost 2 kilometers of drape lights in warm white transformed the center a magical space that drew visitors far and wide. And when they came, visitors loved what they saw, capturing and sharing images and videos of the lighting widely on social media, where individual posts on Instagram regularly received tens of thousands of impressions, thousands of likes, and many comments across all audience groups.

Westfield was also pleased with the final result and with the unique festive atmosphere that they created for the season. The lighting and décor remained in the center throughout the holidays, finally being removed in early January. In 2019, Westfield London will shine again for the festive season.

Request an interview or more information

For a media pack, more information, or to request an interview, please contact: