Westgate Shopping City (Westgate) is based in Zagreb, Croatia, and it is the largest shopping center in continental Europe, poised to become the largest in the EU as the UK prepares for Brexit. In 2018, the center embarked on a revitalization strategy, and one of their objectives was to increase footfall year on year.

Over the Advent and Christmas season, MK Illumination Adriatic designed lighting and decorative concepts to create atmosphere in the center as part of a larger center campaign that included entertainment and gastronomic delights. The result was an overwhelming success, and one of the center’s show-stopping feature, a swing with a heart-shaped back that rippled with lights, not only featured prominently throughout the holiday season, but continues to make visitors happy as a feature I the center to celebrate Valentine’s day, too.

This is their story.

The center management team at Westgate Shopping City is committed to creating a welcoming space throughout the year, and they understand the importance of using events, entertainment, and decoration as part of their visitor attraction strategy.

As part of its revitalization strategy, the team wanted to transform Westgate into a winter fairy tale over the 2018 holiday season. They had already organized a series of events to engage visitors, including an Advent Festival featuring live music, a winter shopping fair, and gastronomical delights that ranged from sausages to sushi. To complement their activities they wanted to incorporate festive lighting and decoration to create the right atmosphere, create a seasonal “buzz” that would draw visitors, and position their Advent celebrations as the most beautiful in the region.

MK Illumination Adriatic was invited to present ideas and lighting and decoration solutions to help the center achieve its seasonal goals and they were impressed with MK’s insights into the shopping center industry, their concept proposals that had been custom-designed for Westgate’s space,  their understanding of how the lighting and décor would work hand-in-hand with the center’s Advent campaign, and their successful track record of helping other large centers, including Westfield in London (the largest shopping center in Europe to date), transform their spaces.

MK was awarded the project and they set to work immediately with the holiday season mere months away. They began by finalizing the festive look and feel of the center with Westgate to ensure that it would work harmoniously with existing decorative elements, before sending the motifs and concepts to be realized in their production facilities in Slovakia.

The final lighting and decorative concepts were installed in a record-breaking 3 days and nights and transformed both indoor and outdoor areas of the center. The final design included 3D motifs indoors like a 3D flying reindeer filled with Christmas baubles, a magnificent standing reindeer pulling a sleigh, a Santa Claus surrounded by presents, all of which became photo opportunities for young and old alike.

Decorative motifs like organic balls that lit up the ice rink, iString lites that highlighted indoor architectural features, and the unusual “love swing”, a fully-functioning, multi-person swing, decorated with flashing red and pink lights, helped to reinforce the center’s motto of “Love Christmas at Westgate”.

Outside, the facades of a number of pavilions were brought to life with hanging lights, and in the center of them all, an illuminated artificial tree lit up the night sky. 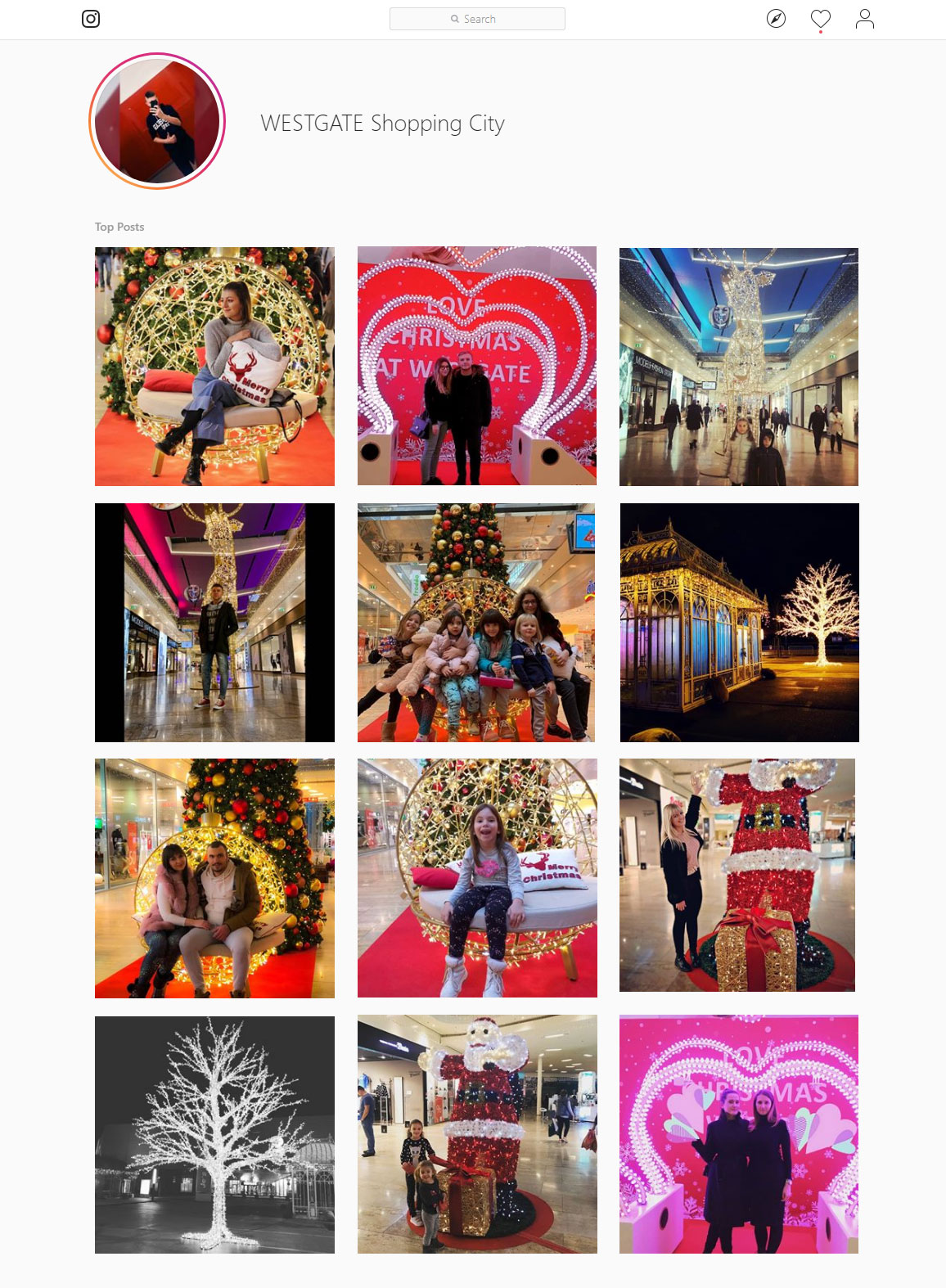 Westgate Shopping City reported that their seasonal activities like the Advent Festival, visits from Santa, and entertainment events were a resounding success and that the festive lighting and décor helped to draw visitors.

The décor and lighting were photographed extensively, often forming the backdrop to selfies and family Christmas photos, and formed the backbone of a competition campaign that Westgate ran in parallel to award the most creative photos posted on social media with Christmas shopping vouchers. The center was pleased with the online activity, saying, “On social media, posts about the lighting and décor became a huge hit, with a reach of tens of thousands and hundreds of likes, reactions, comments and shares.”

The lighting and decoration also attracted the local media, and the center was well-positioned online, in print, and on local television, and featured in numerous media reports throughout the season. 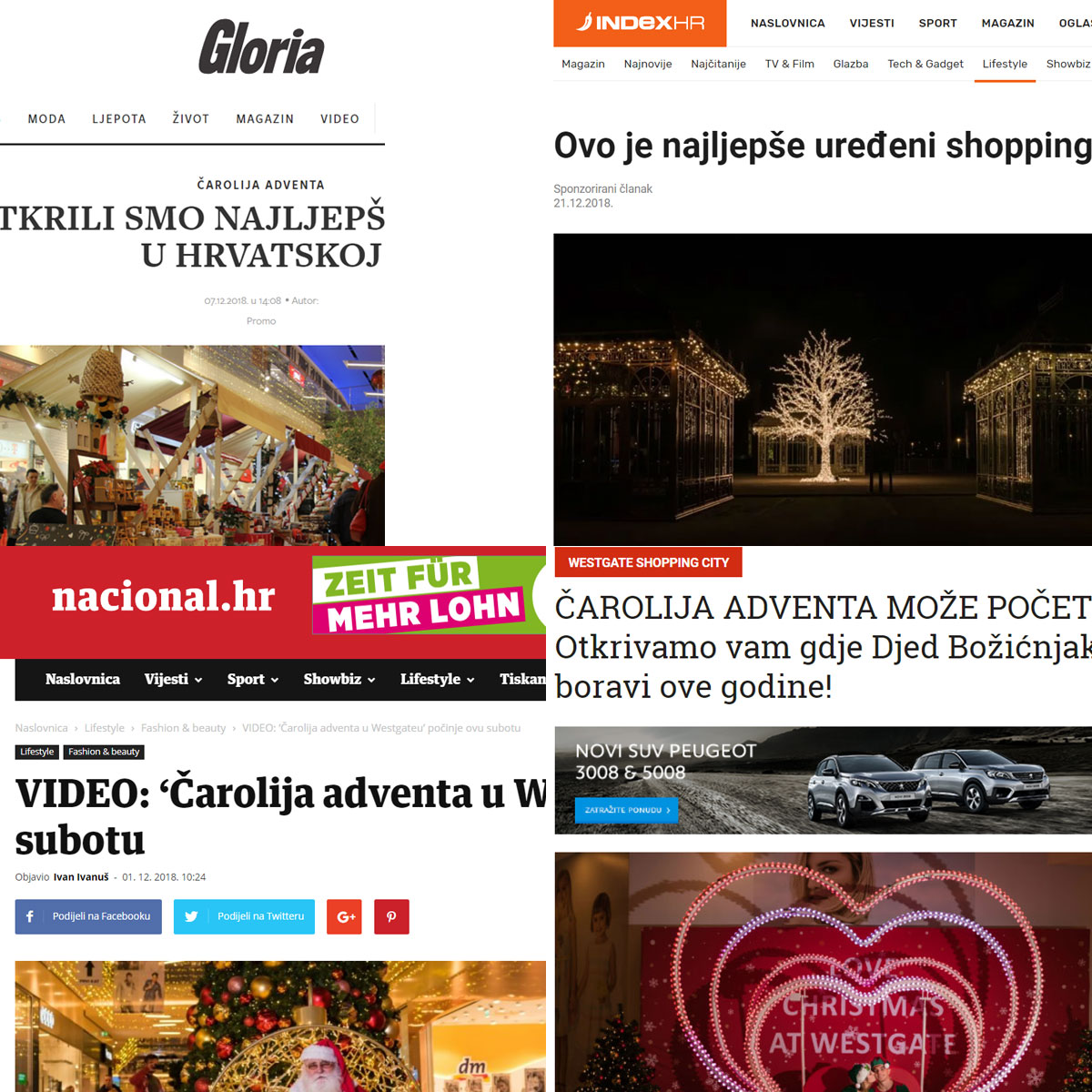 It wasn’t only visitors to the center who were delighted, either: the tenants were happy, too, and are said to have given the center management team positive feedback, comparing the new decoration favourably with previous years.

“We will definitely be organizing our Advent Fair in 2019, which will include MK Illumination’s festive lighting and decoration as part of the celebrations, and as we will soon become the largest shopping mall in the European Union, we are sure that we will continue our cooperation with MK Illumination for other projects in the future, too,” said a representative of the center.

And the customer said…

“This year MK Illumination took part in the largest private advent celebration in Croatia creating a special, Christmas atmosphere for the center. Christmas decoration outside and inside the center featured a number of different, attractive installations, which created a lot of excitement for both our customers and the media who reported on the center’s Advent and holiday activities in locally and nationally.

Festive lighting and décor doesn’t work in isolation. We know that they usually forms part of a center’s wider marketing campaign over the season, and we have ideas to help you enhance customer experience to drive footfall, encourage flow, and delight customers and the media alike.

Get in touch with one of our local teams to talk about how we can help you achieve your campaign goals.