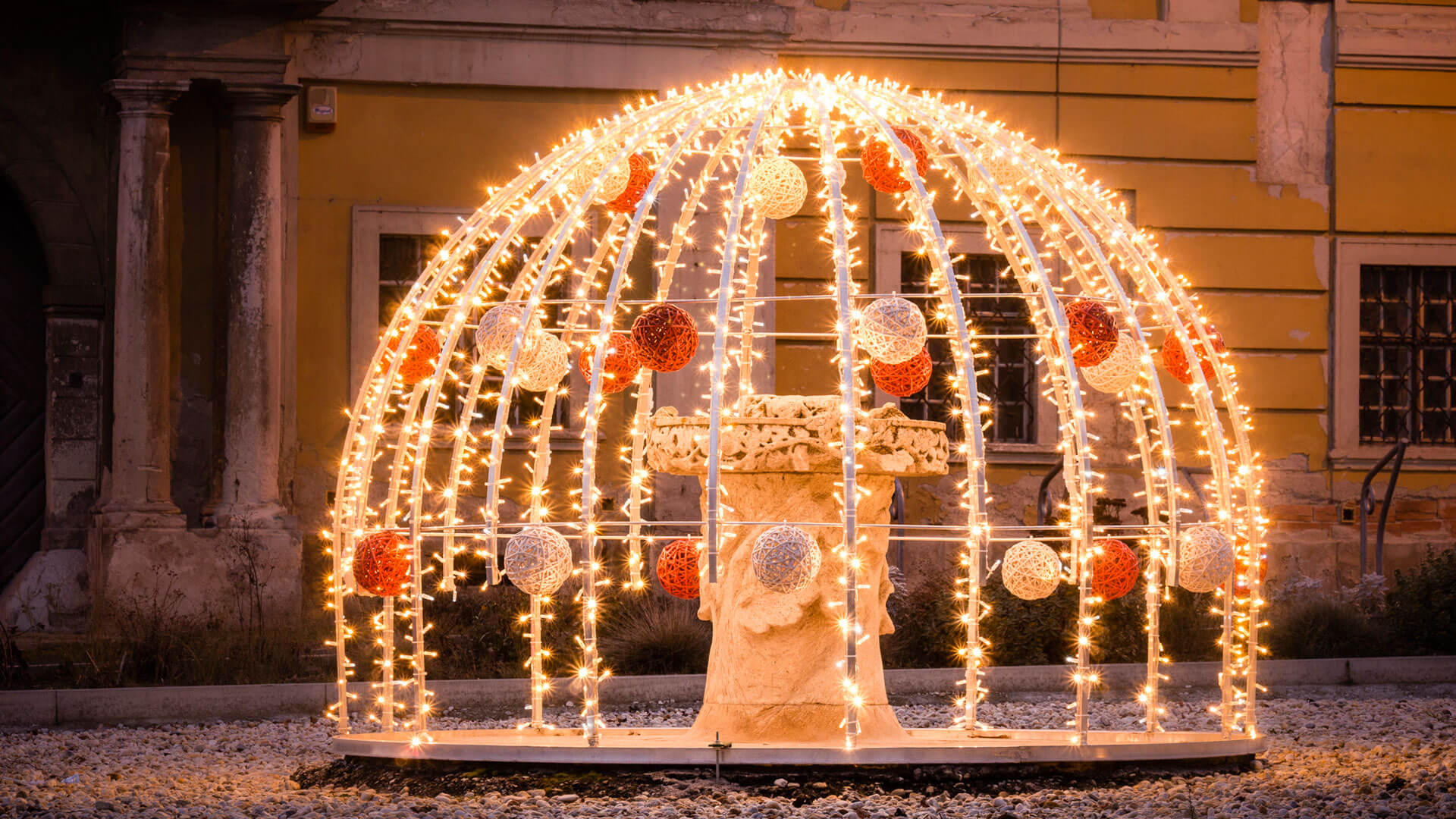 Scaling down: Christmas lighting doesn’t have to be big to be spectacular

Christmas and holiday lighting is a big draw for shopping centers, public places, cities and any retail space, amusement park or leisure attraction that wants to increase visitor numbers over the winter months. If you have a smaller lighting project in mind, you might have the impression that MK Illumination can’t help – after all, many of our projects are instantly recognizable extravaganzas of light.

But if you have that impression, you’d be mistaken.

We create lighting solutions tailored for shapes, sizes and budgets of all sizes, and today we’d share five of our smaller high-impact projects with you.

MK Illumination’s Canadian team turned a busy business building’s lobby into a space infused with Christmas spirit – all without using up too much of the floor space needed for foot-traffic. How did they do it? With LED Drape Lites from MK Illumination’s product range and Christmas bubbles with a “candy” finish.

Henrik Peterson, the owner of the Rådhuskroen Inn in Ringsted, was delighted when MK Illumination Denmark’s Managing Director, Rene Hansen, popped in to ask why he had no Christmas lights over the winter months. Peterson had been racking his brains about what to do about Christmas lighting at the time, and when Hansen presented him with a simulation of how his inn might look, Peterson decided to go ahead. He knew that the lights would change the atmosphere of his inn, but he didn’t expect all the added benefits, including a 20% increase in revenue over the holiday season, repeat business from visitors who enjoyed the glowing lights, and PR, media and word-of-mouth coverage.

Merchants Quay Shopping Center wanted a festive lighting display that was fun, colorful and high-impact and that encouraged visitors to take photos. MK Illumination Ireland combined strings of hanging lights with bright, multi-colored Christmas baubles and a suite of characters from our MK Themed Attractions fiberglass range that delighted children, encouraged lots of photo-taking, and that was featured in the local media and shared online.

This smart shopping center in Russia wanted a custom-designed mascot to greet visitors on arrival and make an impression. The result was Boris the Stag, a 3D lighting sculpture that was designed by MK Illumination’s creative director and design team and developed in Russia.

Thune is a building complex built in the early 1900s for use as a production facility for power turbines and trains. Now the building has been repurposed and converted into a wholesale cluster housing brand-name shops.
The team at MK Illumination Norway was asked to light up the complex, and they decided to use tasteful lighting to highlight the building’s architecture, a decision that has been well-received by the client. To add contrast and a playful twist to the overall lighting design, they added chandeliers, an unexpected touch in an otherwise industrial setting, making Thune a must-see during the season.

MK Illumination Hungary worked with Fertőrákos, a small municipality close to the Austrian border who wanted to add some sparkle over the winter months. After some discussion, the team in Hungary proposed a simple decoration illuminated with 2240 LED light points and organic balls that glitter at night and look attractive during the day, too.

We’re reliably told that the people of Fertőrákos love it, and that the MK Illumination team in Hungary do, too!

To learn more about these projects or to find out how we can help you transform your space, whatever your budget, get in touch to chat.