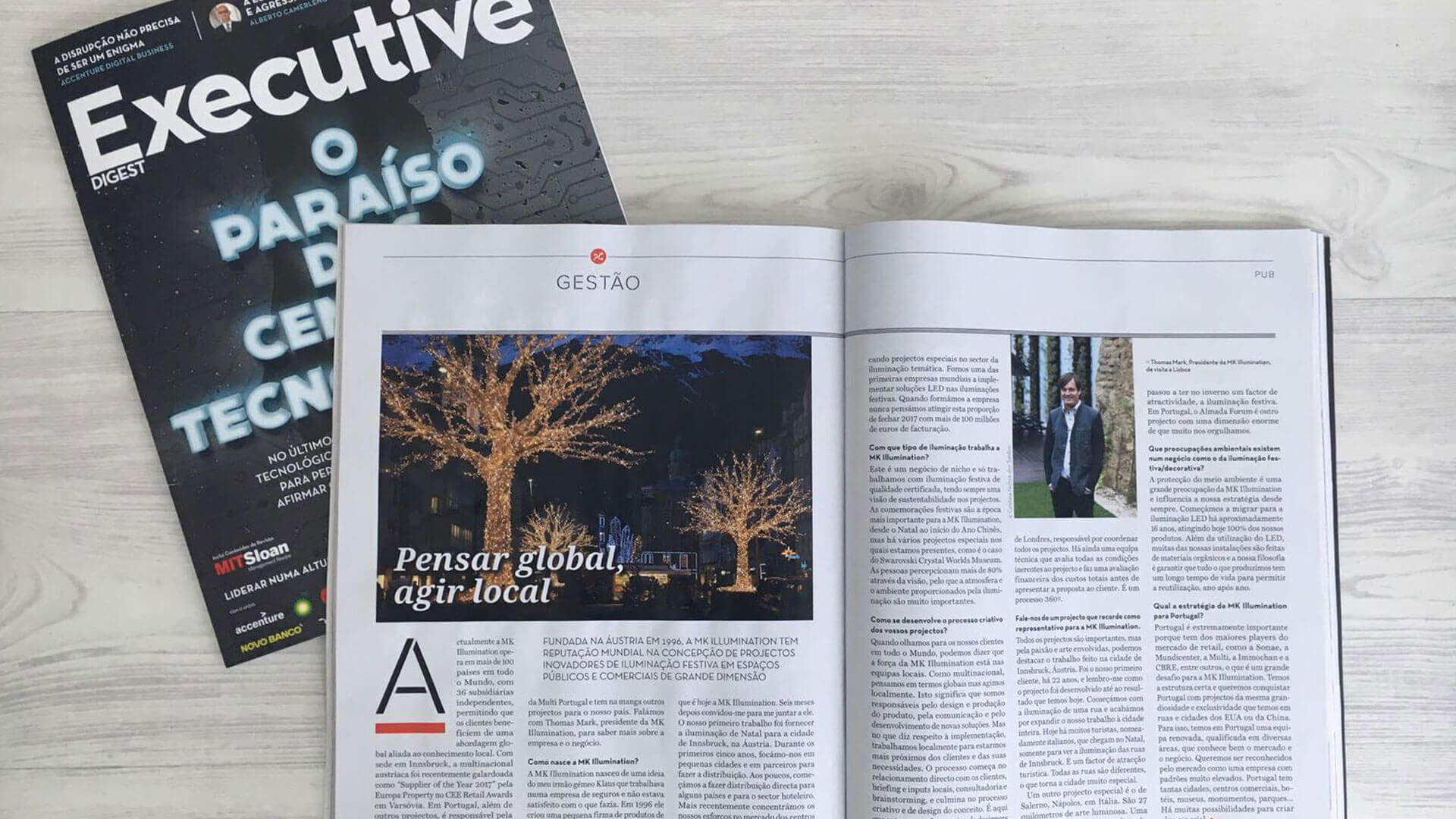 Founded in Austria in 1996, MK Illumination has a worldwide reputation for designing innovative festive lighting for large public and commercial spaces. Today, MK Illumination operates in more than 100 countries around the world, with 36 independent subsidiaries, allowing each company to benefit from a global approach combined with local knowledge. Headquartered in Innsbruck, the Austrian multinational was recently awarded “Supplier of the Year 2017” by Europa Property at the CEE Retail Awards in Warsaw.

In Portugal, the company is responsible for the Christmas lighting at Multi Portugal’s Almada Forum shopping center among other projects.

We spoke with Thomas Mark, President of MK Illumination, to learn more about the company and the business.

“MK Illumination’s strength lies in our local teams. As a multinational, we think globally but act locally.”

Thomas Mark: MK Illumination is the brainchild of my twin brother Klaus. In 1996 he was working for an insurance company and he wasn’t happy, so he started a small lighting products business, which grew into the successful business that is MK Illumination today. Six months after starting the lighting products business, he invited me to join him and our first job was to provide Christmas lighting to the city of Innsbruck in Austria.

In the first five years, we focused on small towns and worked with partners who distributed our lights. Gradually, we began to distribute lights directly to a handful of countries and to the hotel sector. In recent years, we have concentrated our efforts on the shopping center, tourism and leisure market, specializing in projects in the festive and themed lighting sector. We were one of the first companies in the world to implement LED solutions in festive lighting installations. When we formed the company all those years ago, we never expected that in 2017 we’d have a turnover in excess of €100 million!

Executive Digest PT: What kind of lighting does MK Illumination work with?

Thomas Mark: This is a niche business and we only work with quality, certified festive lighting that is, as far as possible, sustainable. The festive season, which runs from Christmas to the beginning of the Chinese Year, is usually the busiest time of the year for us, but we’re also increasingly involved in projects that fall outside the season, like the Swarovski Crystal Worlds Museum. As humans, vision is our dominant sense, and more than 80% of our perception is mediated through vision, so the atmosphere and the environment provided by the lighting are very important.

Thomas Mark: When we look at our customers around the world, we can honestly say that MK Illumination’s strength lies in our local teams. As a multinational, we think globally but act locally. This means that we are responsible for the design and production of products, and for communication and the development of new solutions, but in terms of understanding customers’ needs and implementing their lighting installations, we work locally to ensure that we understand precisely what is needed. We always have a direct relationship with our customers and at the start of each project, there is phase where we get local inputs, receive briefings, participate in brainstorming sessions and offer consulting. This feeds into the creative process and concept design, and at this point, local designers get involved, working with the local office responsible for coordinating projects, and our technical team evaluates all aspects of the project in order to prepare a detailed cost breakdown. All this happens before we present a proposal to the customer. It’s a 360° process.

Executive Digest PT: Tell us about one of your projects that you feel illustrates MK Illumination’s unique approach.

Thomas Mark: All of our projects are representative of MK Illumination, but if I had to choose one, thinking particularly about the passion and the creativity involved, I’d choose the work we’ve done over the years for the city of Innsbruck in Austria. The City of Innsbruck was our first customer 22 years ago and it’s been interesting to see how the project has changed and developed into what we have today. We started with festive lighting of a single street and now we decorate the whole city with lights. Today there are many tourists, especially Italians, who come to Innsbruck over the Christmas season simply to see the illuminated streets of Innsbruck. The festive lighting has become an important aspect of tourist attraction. Each street in the city is different, which makes the experience of walking through the city very special.

Another project that I feel is worth mentioning is that of Salerno, Naples, in Italy, that boasts 27 kilometers of light art throughout the city. Salerno previously relied purely on summer tourism and thanks to the festive lighting, the city now has a busy winter tourism season that attracts visitors from across Italy.

Here in Portugal, the festive lighting at Almada Forum is a large project that represents our work well, and of which we’re very proud.

Executive Digest PT: What are the environmental considerations for a festive and decorative lighting company like MK Illumination?

Thomas Mark: The protection of the environment is a major concern of MK Illumination and has influenced our strategy from the start. We started migrating to LED lighting about 16 years ago, and today 100% of our products use LEDs. In addition to the use of LEDs, many of our products are made from organic materials and our philosophy is to ensure that everything we produce has a long lifespan to allow reuse year after year.

Executive Digest PT: What is MK Illumination’s strategy for Portugal?

Thomas Mark: Portugal is extremely important to us because it is home to some of the biggest players in the retail market, such as Sonae, Mundicenter, Multi, Immochan and CBRE, among others. This represents a great opportunity for MK Illumination. We have the right sort of structure in place to deliver projects in Portugal that have the same grandeur and exclusivity as the projects that we deliver in the streets and cities of the USA or China. To achieve this, we have local, qualified team in Portugal who know the market and the business. One of our objectives is to be recognized by the market as a company with very high standards.

Portugal has so many cities, shopping centers, hotels, museums, monuments, parks… There are unlimited possibilities to create something special.

* This interview originally appeared in the April 2018 edition of Executive Digest PT.