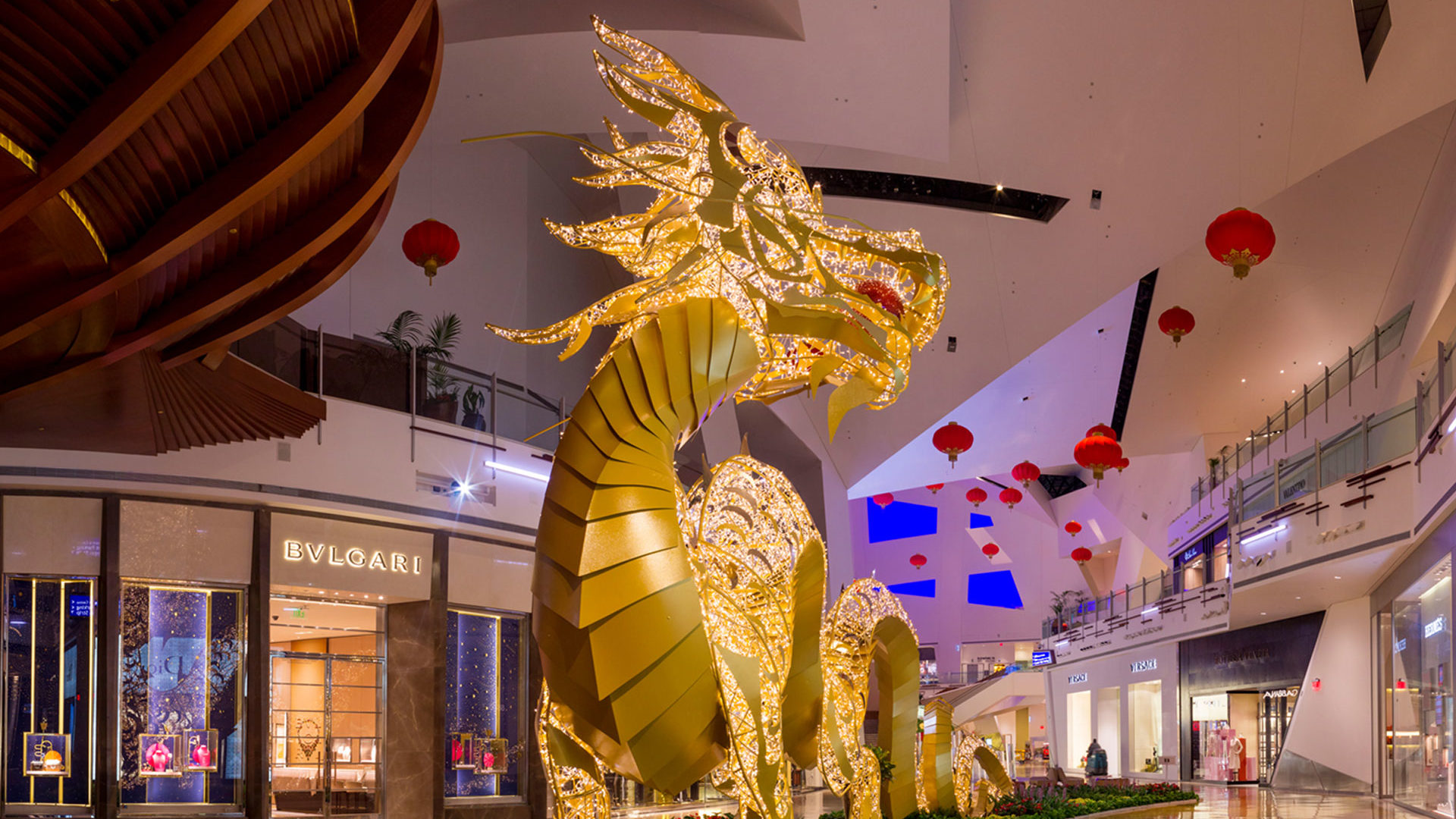 Shopping Center - The Shops at Crystals

The Shops at Crystals had a vision: they wanted to create an extraordinary highlight for their space that would celebrate the Chinese New Year and act as a show-stopping centerpiece in one of the most luxurious, elegant, and architecturally advanced retail spaces in Las Vegas.

MK Illumination USA was brought in to help them bring their vision to life and after some careful listening and review of the space, two important aspects of the project came to light. First, the dragon needed to be designed in such a way that would honor Chinese culture, weaving in meaning through color, symbols, positioning, and aspect. Second, in addition to being culturally appropriate, the design also needed to be sumptuous and contemporary, filling the available space without dominating, and blending harmoniously with the beautifully appointed collection of 50 of the finest luxury brands in the world all under one roof.

As discussions continued, an image began to crystalize of a superior dragon coated in gold, one that had lived a long and prosperous life and who now looked upon humankind with kindness and compassion. Wise and wealthy, the dragon would convey the unspoken message of stability, warmth, security, good luck and a warm welcome at all times.

From an initial sketch, a serious of 3D designs developed. The final concept met both commercial and cultural requirements, presenting a modern take on a traditional Chinese dragon as a 3D light sculpture that would use space wisely, and become a visitor attraction as well as a feature that would complement the brands in the center.

“This dragon owes its success in part to what I can only describe as a global-local artisanal process. By that I mean that a global team came together to contribute their skills and expertise, continually guided by artists from the first sketch to the welding and installation process, and the result is a spectacular display that is as much a work of art as a 3D lighting sculpture,” said Georg Öhler, Creative Director of MK Illumination

The birth of the dragon was a labor of love that involved teams in China, Slovakia, the UK, Austria and the USA, and a variety of complementary skills and technologies. The 3D frame was designed and produced in Slovakia then coated in metallic gold, its opulent finish achieved by using Italian-sourced gold pigment; its life-like teeth were the result of employing 3D printing technology, and the tens of thousands of light points were designed to illuminate the dragon and the space in which it would stand. Throughout the design and production of the dragon, designers and artists, technicians and cultural consultants worked together to ensure that the finished dragon was both culturally sound and true to the original artwork. On completion, Billy the dragon was blessed by our Chinese cultural consultants.

The final sculpture was mythical in its proportions – 24 feet tall, 53 feet long, and weighing over 3000 pounds – and its now-legendary journey took it from Prešov, Slovakia to Las Vegas, USA, in one solid piece that meant no further on-site building was required. It was secured in place at its new home in early January 2018.

The one-of-a-kind dragon now stands proudly at the center of The Shops at Crystals. It faces north, bending its head towards the Las Vegas strip. It is smiling, a red pearl in its mouth, hinting at a life well-lived and filled with enlightenment. It glitters gold, the color of the sun, of wealth, of prosperity and good fortune. And lit by over 100,000 points of light, it welcomes visitors to the center, inviting them to stay a while, to shop, and to enjoy an auspicious start to the New Year.

“The dragon is simply huge, but so is the space, and what’s remarkable is how well the sculpture works on this scale, and in the space itself. Contrary to what you might think, it’s not that easy to fill a space so well with such a large sculpture, and I believe that the reason it works so well is because MK Illumination custom-designed the dragon for this space, this location and the Chinese New Year celebration,” said Öhler.

The dragon in numbers

MK Illumination USA designed and produced the golden dragon for Western Design LLC in a long term cooperation for their clients The Shops at Crystals, a Simon Property.