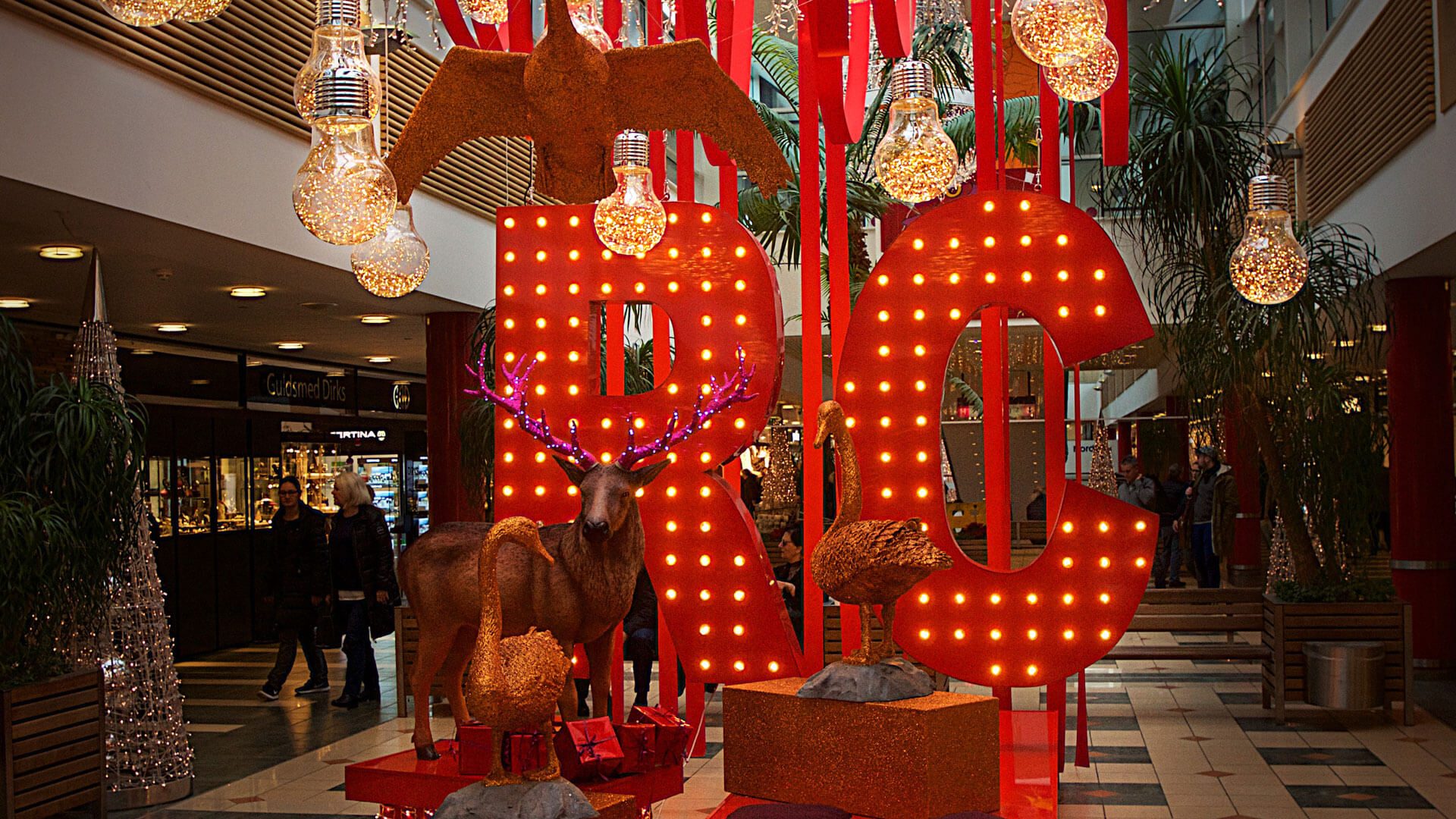 MK Illumination Denmark has been one of Rødovre Centrum’s preferred suppliers for a number of years and is often called upon to brainstorm ideas, give advice and create creative festive and decorative concepts for events and festivities throughout the year. Rødovre Centrum’s creative marketing ideas, often translated into decorative and lighting displays, have helped the center win numerous awards over the years.

In 2017, marketing manager came up with an original idea for their festive marketing campaign. She’s a great believer in the power of being different and her idea of creating an interactive campaign that incorporated digital and analog elements into what she called “Bad Santa” was certainly one that stood out!

“As a shopping center, you need to be creative and unique in order to stand out from the competition,” explains Charlotte Andersen, Marketing Director of the renowned shopping center in Copenhagen.

She approached MK Illumination with her ideas, her color palette, and her plans, and the team in Denmark set to work to make them a reality.

Working with a rich red and purple palette that, MK Illumination created several displays and standout lighting and decorative pieces that would not only become a feature in the shopping center itself, but also become backdrops and props in “Bad Santa’s” naughty light – in magazine photos, online videos, and social media profiles.

Decorative elements like the elves playing in the snow and clustering around a sled, reindeer with horns covered in purple glitter, and flying swans, also covered in red or purple glitter and upcycled from a previous campaign, delighted younger visitors and featured in many of the analog and online campaign photos.

Large initials – “RC” – in red sparkled with embedded LED lights and a reindeer formed part of the selfie area, which Andersen explained was an essential part of the display, saying: “The selfie area is very important. Sometimes the whole family comes, takes a photo of themselves with their mobile, and uses it as a Christmas card.“

The displays were enhanced with strings of twinkling lights and over-sized Edison balls, and the sparkling theme continued throughout the mall, spreading good cheer and keep the look and feel consistent throughout. And consistency is also essential, according to Andersen, who said, “We use the same look all over. This is not only a shopping center, it’s a brand.“

Rødovre Centrum’s “Bad Santa” campaign was incredibly well-received. They went out of their way to do more than simply create a fun shopping experience. They used storytelling (about the antics of a “Bad Santa”) to create an engaging and interactive experience for visitors that they were able to build upon and share across all channels – digital and analogue – and meet the expectations of multiple generations by tapping into their emotions and communicating with them in the right way.

Visitor numbers were up, the online engagement with the “Bad Santa” himself was unprecedented, and the Christmas lighting and decoration helped to keep the overall look and feel consistent, engaging and exciting, whilst adding a fun festive atmosphere to the center and the marketing campaign as a whole.

Rødovre Centrum set a new standard in the industry in 2018 and we can’t wait to see what the coming year will bring!