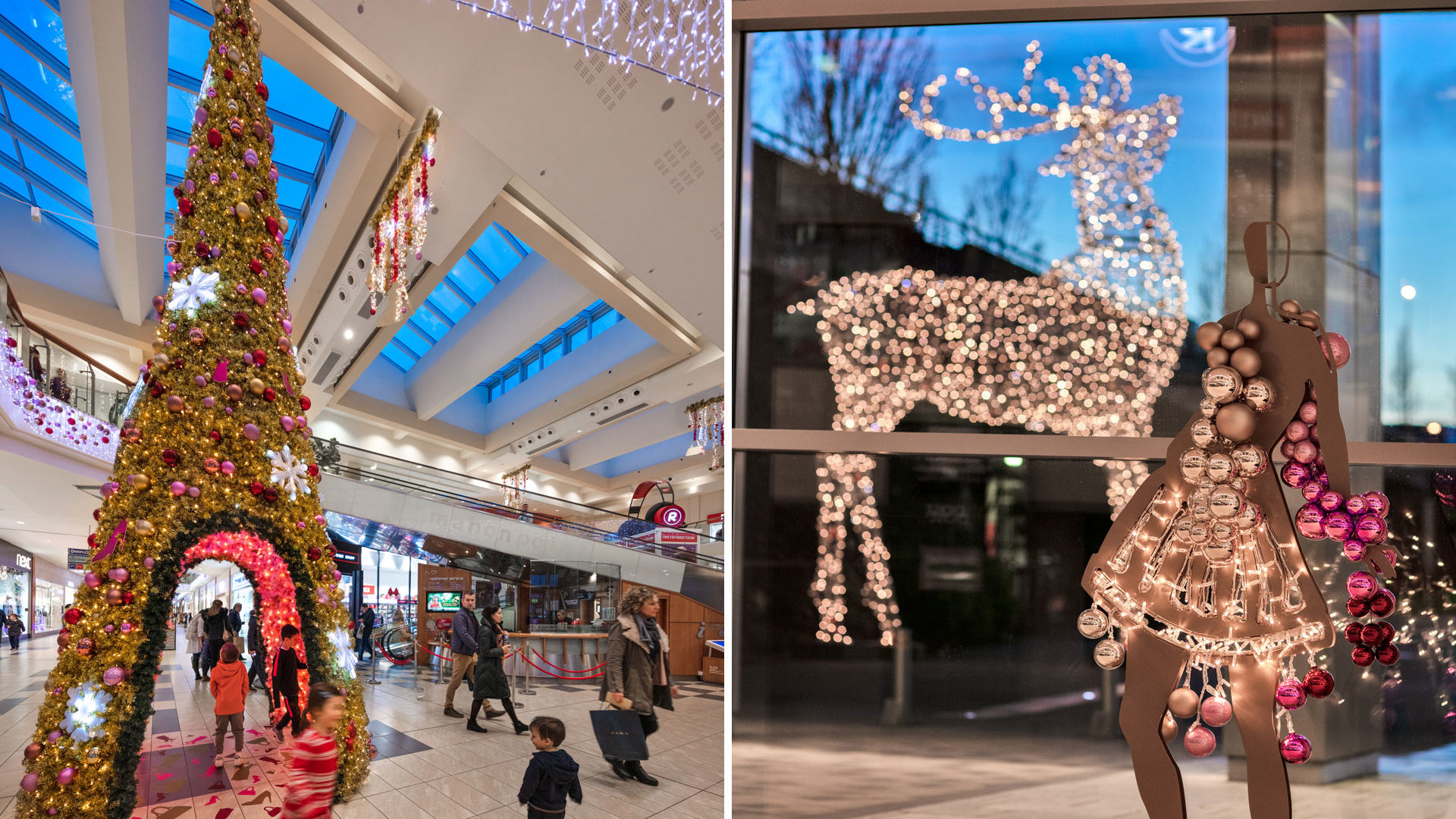 Mahon Point Shopping Center in Cork, Ireland has been working with MK Illumination Ireland since 2008 to fill its space with light, decoration, and festive cheer. In an interview with John Riordan, Managing Director of MK Illumination Ireland, we find out how the relationship came about, how Mahon Point’s holiday décor has changed over the years, and take a look at their latest festive display, inspired by fashion and fun.

You’ve been working with Mahon Point since 2008 as their festive lighting and décor supplier. How did that come about?

JR:  As with most of our projects, we were invited to submit a proposal as part of a tender process. The center opened in 2005 and by 2008 the center management was looking for something different and fresh. The center manager at the time knew MK Illumination because we’d worked with him when he’d managed other centers in the area, and he liked our approach. I’m pleased to say that we understood the brief and we won the tender. Every 3-4 years, the center issues a new tender, and I’m even more pleased to say that we’ve continued to win each time.

How many different festive lighting concepts have you created for Mahon Point over the years, and how have the concepts changed?

JR: Since 2008, we’ve created 4 different festive concepts for Mahon Point. Our 2008 concept was full of red and ice white, with soaring red-nosed reindeer suspended from the center’s ceilings. Shoppers had never seen anything like it and it was an immediate hit. In 2012, the center wanted the lighting to feel warmer, so we added gold to the color palette as well as warm white light. The overall feel was softer, more inviting. 2012 was also the year that we installed the 6.5m reindeer that has since become a symbol of the center over the holidays, as well a giant tree: big, bold motifs that really caught people’s eyes. In 2015, the reindeer and giant tree remained, as did the color scheme, but we added new star motifs throughout the center, re-introduced ice white light to add contrast, and incorporated a Santa’s Grotto, which the kids loved. In 2018, everything changed: the color scheme, the motifs. Everything except the 6.5m reindeer, of course – that remained, guarding over the center from the outside.

Sounds exciting, but mysterious! How and why did the 2018 concept change?

JR: The change was inspired by the center management team. Their main goal was to create something radically different to all their previous festive concepts: still festive, but something that would immediately make people say “Wow!” when they walked into the center.

Like any successful business, Mahon Point keeps an eye on their audience – in this case, their shoppers – and they identified that around 70% of their shoppers were female. So the goal was to create something festive that would be a talking point and that women in particular would enjoy.

The result was a fashion concept with oversized 3D light sculptures of handbags, high heel shoes, and perfume bottles displayed them around the center. We changed the giant tree into a giant walk-through tree, decorated with foil cut-outs of bags, perfume bottles and shoes, and filled the interior with glitter-encrusted bags – a big hit with children and the young at heart! And the color scheme was adapted to have a more fashionable feel to it: out went the red and in came gold, silver, and white with a splash of pink.

What was the response to the new concept?

JR: Fantastic: shoppers loved both the festive lighting and décor alike, and the center received incredibly positive feedback, so I think that we managed to get the balance between fashion, color, and Christmas just right.

Thanks to social media, we’re all conscious of “sharing” what we see. Was the 2018 fashion concept shared?

JR: Throughout the season. The giant tree became a popular photo spot, with people taking selfies or taking photos of their children and sharing them all over the place. Instagram and Facebook were full of photos of the center’s decoration, and there are quite a few YouTube videos out there, too.  The new designs definitely generated online media engagement for the center.

JR: Over the years we’ve seen that shopping centers need to differentiate themselves in order to drive footfall and engage shoppers, and Mahon Point’s fashion concept certainly helped them to stand out from the crowd.

We’ve also seen an increased demand in not just providing lighting, but in providing lighting that is “experiential”:  in Mahon Point, their walk-through Christmas tree allowed visitors to interact with the festive décor, take photos, and make the festive display of their Christmas experience. This also gave the center extra visibility – with all the smart phones and mobile devices out there, it’s crazy not to give visitors something to photograph and share!

Finally, it’s been interesting to see how Mahon Point’s reindeer has become a seasonal icon: it’s been in place since 2012 and has found a place in both the center’s marketing and in the hearts of shoppers, which triggers memory and emotion, and embeds the brand in people’s minds, and more centers are realizing the power of having a festive symbol as part of the their Christmas branding.

How have you managed to maintain such a good relationship with Mahon Point over the years? 11 years and counting isn’t bad!

JR: We make a real effort to understand their challenges and their goals, and give them the best advice and input possible. And then when we’re given the opportunity to work together, we do whatever we can to exceed expectations. I like to think that we aren’t simply lighting suppliers, but partners in creating the right festive atmosphere: we want our customers to create something fantastic, they want to do the same, and if we can achieve that together, we’re in great shape.

Will the pink and gold fashion theme be back in 2019?

JF: Most certainly: we’re looking forward to it!

“I have worked with John and Caitriona from MK Illumination since 2006. They maintain a professional approach at all times and each Christmas display has been created and installed to a very high standard. In 2012 and 2015 they designed new schemes for Mahon Point SC which attracted a lot of attention from customers and received positive feedback from tenants. This year, they have designed a unique and innovative scheme for Mahon Point that we are very excited about. I have found the team at MK to be experts in their area who are easy to work with and deliver projects on time and within budget.”
—Justin Young, Centre Director, Mahon Point Shopping Centre

For more information about MK Illumination Ireland, visit their website or contact them directly to chat about how they can help you use light and decoration to create a unique festive experience in your space. 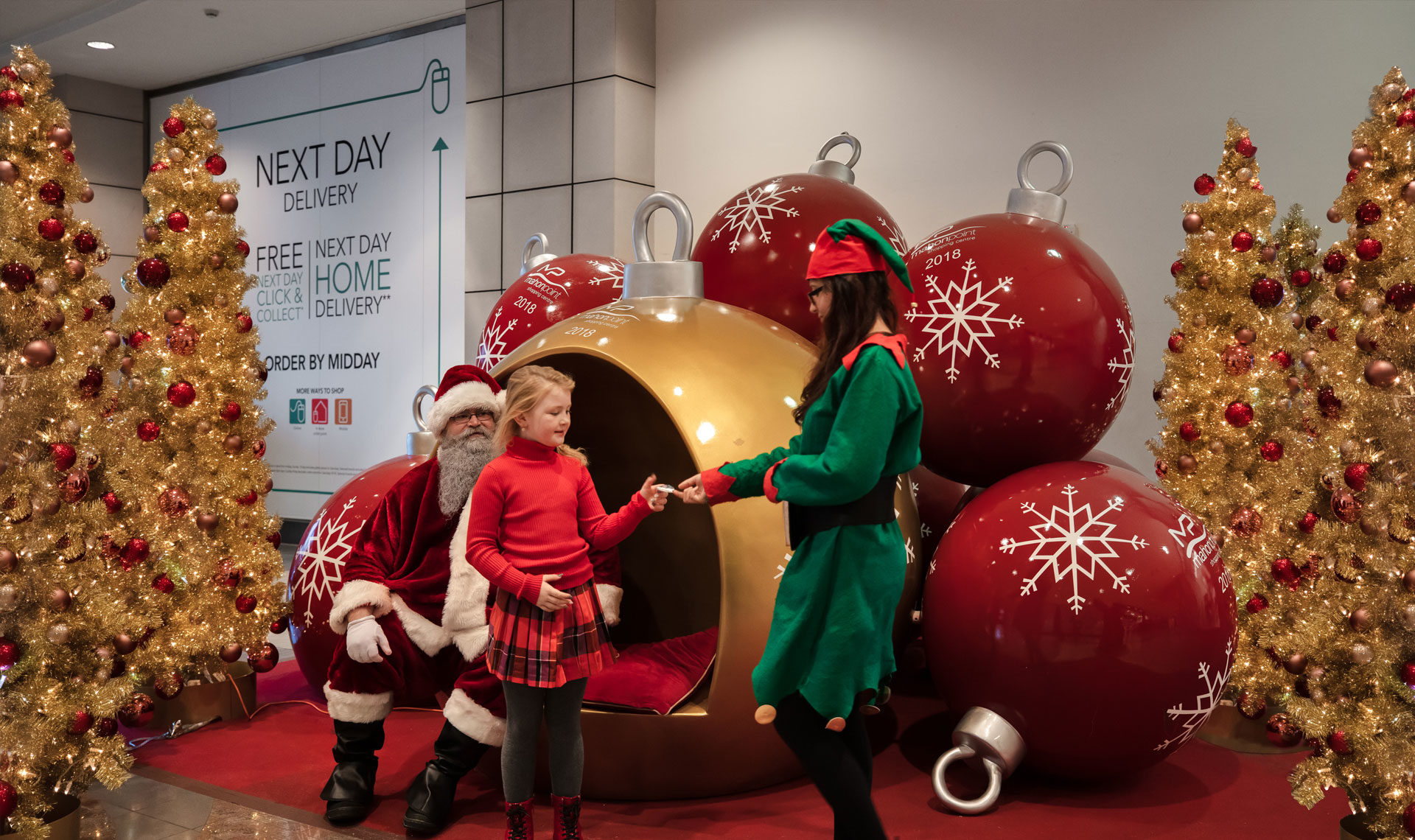