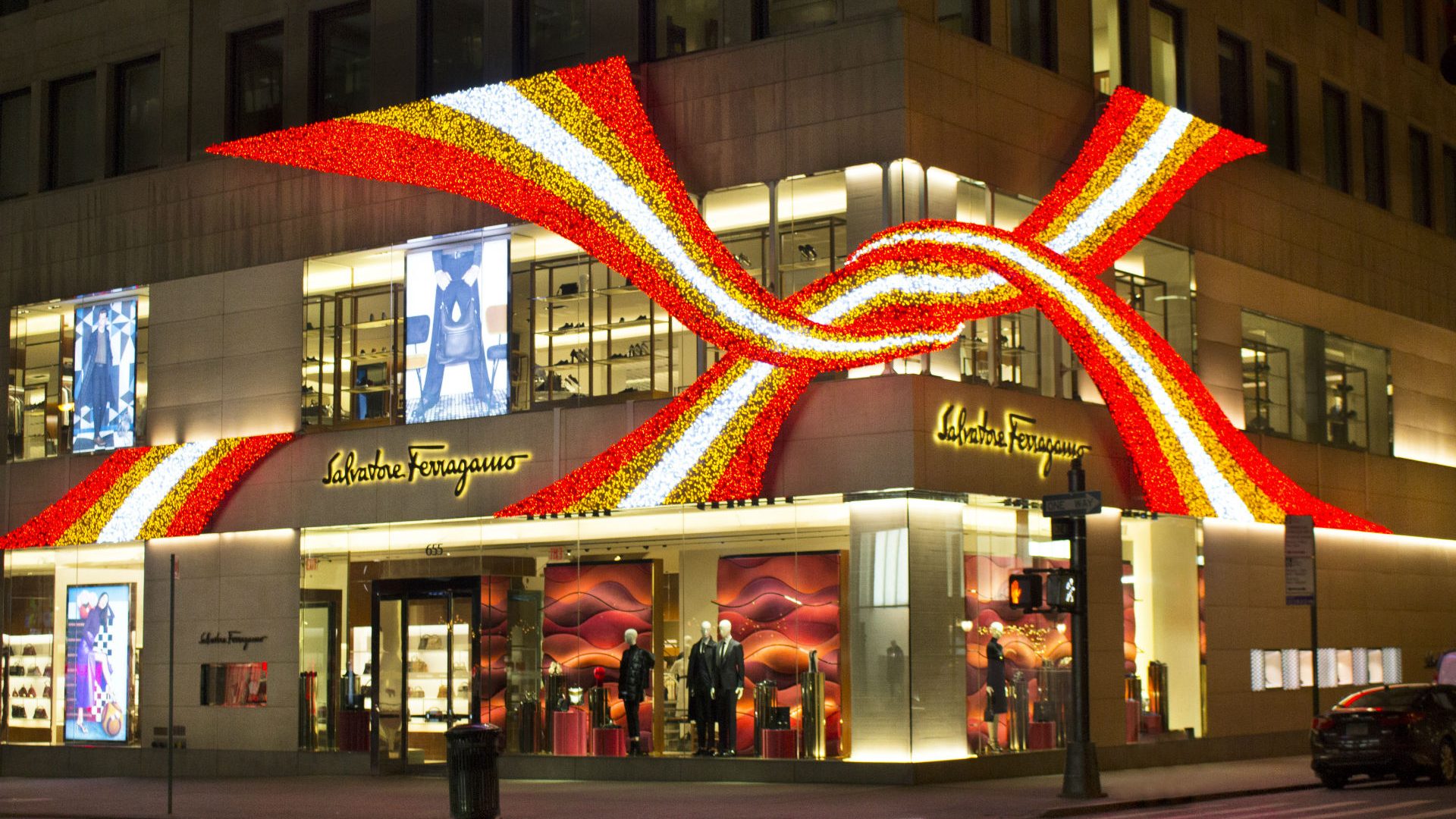 Festive lighting isn’t simply a nice-to-have. For many businesses, festive lighting is a way of communicating brand values, standing out from the crowd and increasing brand recognition. To do this, it’s not enough to create an exceptional lighting display that draws a crowd and fills a space with festive spirit. Instead, it’s necessary to go deeper and design a holiday lighting and decorative display that is interwoven with the brand’s DNA.

That’s exactly what American Christmas by MK Illumination did when the worked with Salvatore Ferragamo on Fifth Avenue, New York.

Salvatore Ferragamo is one of the world’s most recognized luxury brands and its flagship store on Fifth Avenue in New York is a must-see destination for any fashionista, with an area of approximately 20,000 square feet housed in a beautiful limestone building.

MK Illumination’s American Christmas had worked with this location for a number of years, when discussions emerged about creating a one-of-a-kind visual feature for their façade for the holiday season. During further exploration, it became clear that the right solution needed to have a strong and immediately recognizable connection with the brand itself.  An equally important requirement was that the visual presentation be impressive and distinct in order to stand out from façade lighting and decorations installed each year by other flagship stores and businesses along Fifth Avenue.

The American Christmas team wanted to capture the brand essence of Salvatore Ferragamo and interpret it into a festive lighting concept that would surpass the high expectations of the brand, the flagship store and of Fifth Avenue itself. They started with the heritage Fulgente shoe, an iconic legacy design, and transformed the idea to create an eye-catching display that was 100% Salvatore Ferragamo: strands from the shoe in red, gold and white running across the upper floors of the store’s façade in a ribbon of light and color.

The concept was well-received, and because of the prominence of the flagship store and its important role in the global brand, it took more than one season to get final approval. The final designs were approved in 2017, and the lighting concept came to life with over 76,000 points of light designed to look spectacular at night and equally attractive during daylight hours, as well.

Installation took place over three nights in November. Installers adhered to a carefully-designed installation plan to avoid damaging the limestone fascia with drills, and each day, the work-in-progress was planned to ensure that it was visually appealing in spite of being unfinished.

In mid-November, the store switched on its lights without any fanfare, choosing to allow the display to speak for itself.

Not only was the team at Salvatore Ferragamo absolutely thrilled with the presentation but Fifth Avenue buzzed with excitement, all agreeing that the display was particularly creative and innovative. Salvatore Ferragamo experienced a startling increase in its social media presence thanks to blog and social media posting, tagging and sharing, all of which helped to raise the already-prominent profile of this world-famous store over the holiday season.

Is it time to weave your brand’s DNA into your holiday lighting?

If you’re interested in talking about how we can help you create a festive lighting and decorative display that combine energy-efficient LEDs and a unique design that captures the essence of your brand, get in touch for a chat. We’d love to talk.