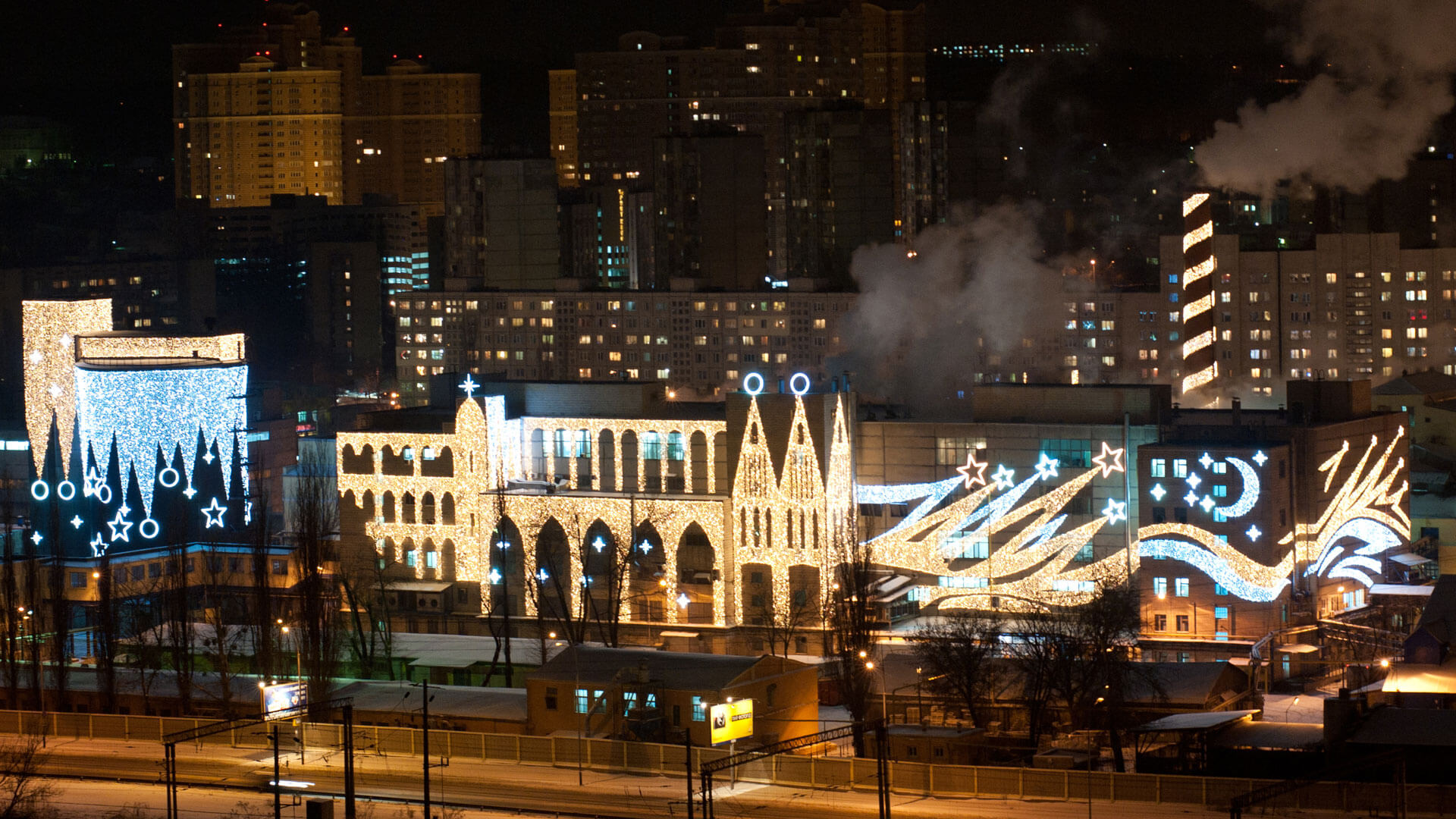 Christmas is a time when every space and building deserves a bit of sparkle, but people are sometimes surprised to hear that we not only use festive lighting to illuminate heritage, corporate and private buildings, but also factories.

That’s exactly what the MK Illumination Ukraine team did, though, transforming the industrial complex of one of the most well-known companies in the country into building filled with light that attracted visitors from far and wide.

Its factory in Kiev, the Kiev ROSHEN Factory, is the most important subdivision of the corporation, and produces more than 300 different confectionery products.

ROSHEN Corporation wanted to turn their massive complex of industrial buildings into a visual extravaganza of festive light and holiday cheer.

In discussions with MK Illumination Ukraine, they explained their vision and were presented with a series of concepts that would transform each of the buildings into individual festive displays with energy-efficient and long-lasting LED lights. The vision was to create not just a festive display for the factory, but visual experience that would become a gift from ROSHEN to the city of Kiev.

Once the ROSHEN Corporation approved the project, it was full-steam ahead, with the team at MK Illumination working around the clock to turn the ideas and concepts into a reality.

After a marathon 138 hours of installation that involved 51 kilometers of electrical cable, and over 500,000 LED lights, the factory complex was illuminated in early November, automatically switching on at dusk and off at 1am to conserve energy, thanks to light sensitive photocells installed by the MK team.

The festive lighting was a resounding success, with thousands of residents and visitors of the city making planned visits to Nauka avenue in order to see the spectacular display with their own eyes, enjoying the gift of the corporation to the city.

It just goes to show that the right festive lighting with the right design can transform any space into a magical place, even industrial complexes that aren’t usually associated with Christmas lights!

Do you have an unusual space or place that would benefit from festive decorative lighting?

We combine a creative eye, lighting expertise, and a combination of local know-how and international experience to turn buildings and structures of all shapes and sizes into illuminated, experiential attraction. If you’re interested in talking about how we can help you create something special for your building, structure or space, get in touch for a chat. We’d love to talk.